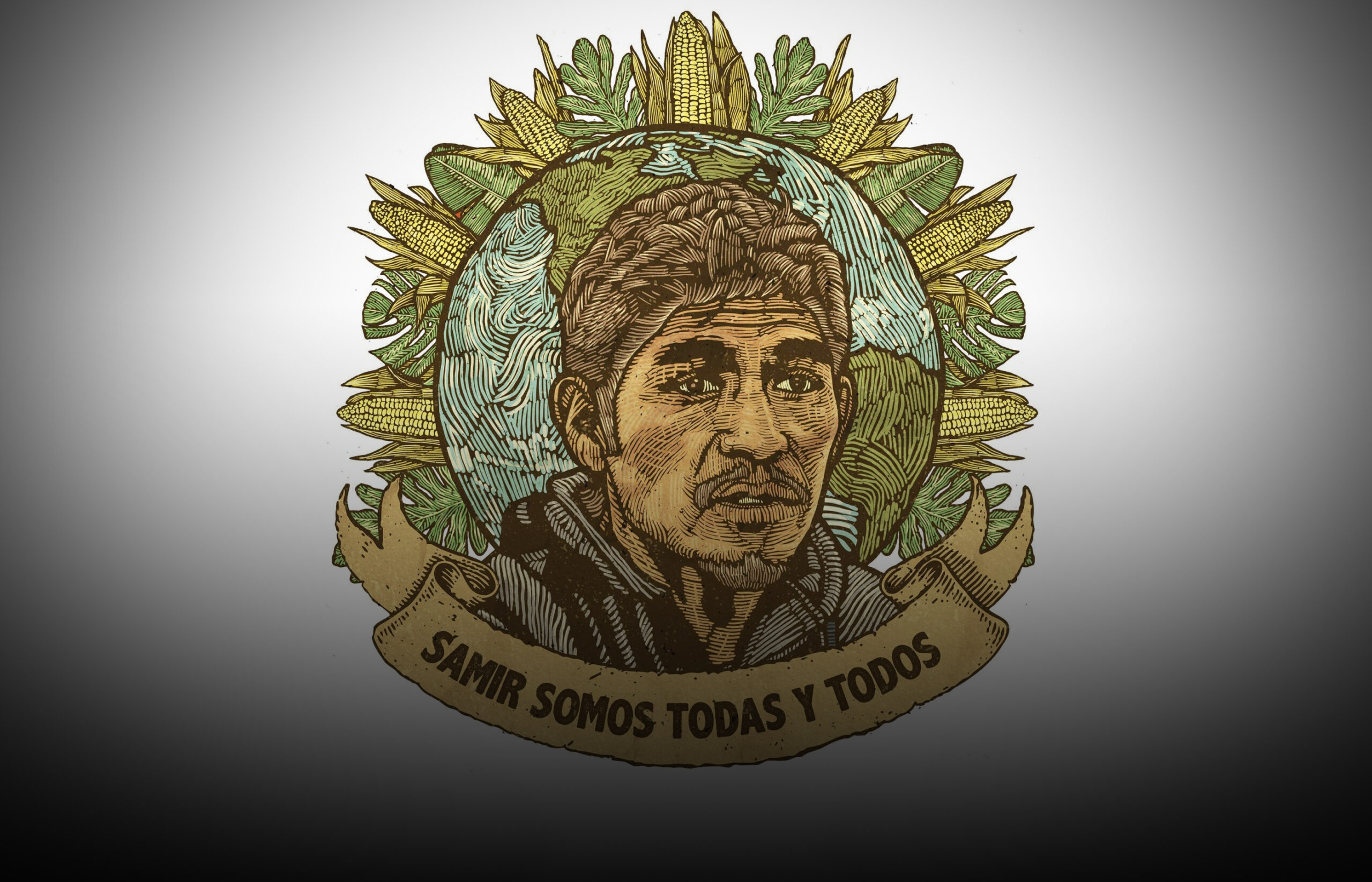 Indigenous communities worldwide are being attacked and suffer state repression. The reason is often times related to neoliberal policies that strive for liberal market reforms and the creation of mega projects, that aim to exploit natural environments for their resources. Mexican activists are under constant surveillance and suffer from violence and suppression. Meanwhile state authorities remain reluctant- in many cases they even profit through lucrative contracts. Samir Flores was a victim of such power plays and we show solidarity with him and other activists who struggle.

Mexico is one of the countries with the greatest variety of flora and fauna in the world (over 200 000 species). At the same time, it is one of the most dangerous countries for those people who defend the forests, animals, seas and rivers, either by maintaining their customs as peoples, raising their voices through community action, or denouncing the impacts that electrical or mining projects have on nature (in 2018 a Nahuatl community in Tecoltemi, Puebla succeeded to file a lawsuit against a Canadian company).

Notwithstanding, the situation remains chaotic and violent: according to Amnesty International (AI), twelve activists have been assassinated in 2019 because of their opposition to major infrastructure projects, such as mining or logging. In 2020 this trend is about to increase, already 4 activists have either been killed or disappeared, amongst others Irma Galindo a forest protector from Oaxaca, one of the culturally most diverse states, that is however, exposed to criminal activities concerning the exploitation of natural spaces (e.g. illegal deforestations).

Indigenous people but also other groups are continuously fighting for their right to live in harmony with the Pachamama. They remain the “conservadores” of social and cultural practices and protect the natural world from destruction. Recently it became clear that this fight comes with dangers. Since AMLO has been in presidency the death toll of ecological activists saw an increase, meaning that the state does not fulfil its obligation of protecting those who fight for the common good – indigenous communities, are the ones that inhabit and protect 50% of the Mexican territory and its resources.

In February 2019 AMLO, who started as a socialist saviour, but slowly loses the initial momentum and euphoria, stated that: “Listen, left-wing radicals, who for me are no more than conservatives: if the Federal Electricity Commission’s thermoelectric plant, which belongs to the nation, is not used, instead of having light for all of Morelos, we will have to continue to buy electricity from foreign companies; it’s that simple.” National mega projects, such as the Tren Maya or the NAICM, are causing similar damages as foreign projects, leading to the destruction of entire ecological systems (Selva Maya) and leaving entire landstrips abandoned.

On the 20th of February 2019 a few days after AMLO rallied against “left-wing radicals” Samir Flores a brave and long-time activist against the Huexca project has been gunned down in front of his house. The incidence occurred in the morning hours after his mother told him that people outside the house were screaming his name. The moment he stepped outside his house 4 shots hit him, two of them directly into his head- Samir died on the way to the hospital. Meanwhile the two cars disappeared in the morning dawn and ever since the case remains unresolved, like 91% of assassination cases in Mexico.

Samir was an impressive personality and role model for his friends and family – he was involved into investigative journalism and had his own radio show, where he continuously uncovered discrepancies and flaws related to, amongst others, ecologically disruptive state projects such as Morelos Integral Project (MIP). The struggle against the thermoelectric plant and the gas pipeline led the indigenous community to a process of organization and practically every day there were assemblies, in which Samir’s voice was heard and considered valuable for the fight. He formed an important part of the community and has been seen as undisputed leader- people understood and followed him. In an interview with La Jornada a comrade from Amilcingo said that: “They didn’t kill an animal, they killed a leader very dear to all of us in this fight. They’re coming for that power plant in exchange for the life of any one of us. Today it’s Samir’s turn, who is going to be next”.

The plant project won with 59 percent of votes cast, but rural and indigenous activists denounced it as a victory “manchada de sangre” — stained in blood. In the following weeks of his assasination people marched in the streets of Mexico City and other cities to rally for justice and commemorate to Samir.

Samir is only one of many brave fighters for the Pachamama. Everywhere across the Mexican soil people stand together and protect the environment, as seen in Oaxaca, Chiapas and Yucatan. Most of them are exposed to threats, from drug cartels that have a connection with local politicians – it is an open secret that both actors profit from such projects due to their lucrative contracts with companies. Moreover, even members of local communities that profit from such mega projects (through financial influx) openly oppose the fight of activists; often hostilities and even death threats are the direct result.

What usually follows is a spiral of violence, repression, political imprisonment and murder, which are powerful instruments used not only by non-state actors but especially by the state itself to kill the resistance carried out by brave indigenous communities and activists.

In a pamphlet from 2018, Subcomandante Moisés said that this spiral has to be destroyed and freed, “There is a double rhythm in the living movement of liberation: the destruction of the old and the creation of the new […] We will not change our history, our pain, our anger, our struggle, for conformism, progress, that eventually destroys our forests and habits!”

We must be aware and show our solidarity with native communities and those activists, who risk their lives for the sake of nature and the well-being of coming generations. For indigenous people, nature is part of their survival and, in fact, we must realize that it is part of everyone’s survival.

This is why we go to the street. One year after Samir’s assassination, on the 20th of February at 15.00 activists from Internationalt Forum, Folkets Hus and Mexicogruppen will gather in front of the Mexican embassy (Bredgade 65), stand together and show our solidarity with all activists in Mexico but also around the world by reading out/handing over a letter of remembrance to the Mexican ambassador. After the manifestation we will hold an informal meeting at Folkets Hus (17.30) to discuss the situation of native communities, such as the Zapatistas and their important role in conserving and protecting nature.

Currently we see activists struggling in Brazil (War of Survival), Germany (Ende Gelände), Denmark (Baltic Pipe NEJ TAK) and many other places. We must continue the fight and raise awareness for our comrades that are fighting against state repression and for the right to live peacefully in nature.

Alika Santiago a defender who opposes Monsanto in Bacalar (“la tierra de nosotras las mujeres”) aptly stated: “Do not forget that we are here, that we are many, and that we will blossom again and again despite all droughts”