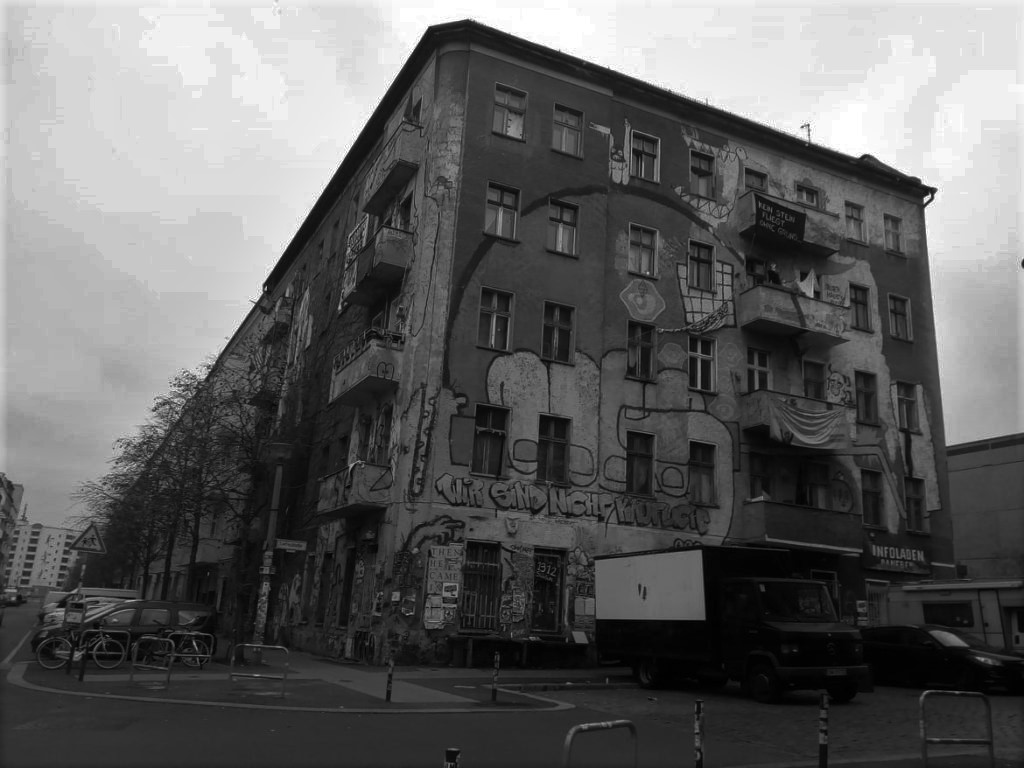 This morning, the cops of the LKA 5.21 unit under the command of Kranich raided Liebig34. Unusual was the saturday, unusual the mix of units from different departments. New were a few civil cop faces, not new: the repression.

The reason for this raid was probably stones thrown from the house during the last few weeks. After the cops collected stones from the Dorfplatz around 2:30 this morning, they obtained a court order and search warrant to search part of our house and returned around 6:30 a.m.. They came through the backyard and the front door, sawed the doors and barris, picked them up and thus forcibly gained access to our project. A lawyer was quickly on the scene and was able to observe and testify. Altogether the cops were about three hours in the house, having searched officially and intensively three connected rooms and the attic. They also snooped around in unlocked private rooms, tore posters from the walls, knocked over furniture, cut internet cables and destroyed windows. During the search, they extensively documented the interior and structure of our house. In the officially searched part of the house they collected plenty of DNA and fingerprints from everyday objects. They also confiscated some items from these rooms, such as cigarette butts, stones, deposit bottles, internet switches, wall paint and clothes. They did not seek contact with the people in the house and did not record any personal data.

Meanwhile and immediately afterwards there were soli actions: the cops were shot from the roof of Liebig14 with fireworks, a cop car covered with stones and paint, barris burned in Rigaerstrasse. People came to support and are still supporting now, helping us to repair our doors together.

This morning joins into the sharpening situation here in the neighbourhood: our anger becomes bigger and the harassment and repression increases. Together we have survived the morning well, but the extensive DNA recording concerns us. It suggests an intention to normalize DNA recording and shows that the cops want to fill their databases. Collecting random samples such as those from cigarettte butts, cups, empty bottles and window frames, shows that even the most basic forms of daily alternative life are criminalised preventively and placed under general suspicion. So it is now enough to drink a cup of coffee in a queer-feminist house project and end up in a DNA database for life, without even a concrete accusation of a so-called crime.

Our answer: Form gangs and get your crew! Only together are we strong!

Become active and do not wait for a dayX. In the case of Liebig34 , we welcome both centralised and decentralised actions of all kinds. Over the past few months, they have put a mischievous smile on our faces. We are seeing an increase in radical and militant practices that implicitly and explicitly refer to feminist issues. We want more of it!

Probs to the action of a FLINT* action group against the ASW last week.

For current information on Liebig34 check:

Tomorrow, Sunday 21.07., 6 pm,manifestation at Dorfplatz in front of our house

Come over! If you have discarded long internet cables, please bring them with you, the pigs have cut our cables, but we won’t be cut off!