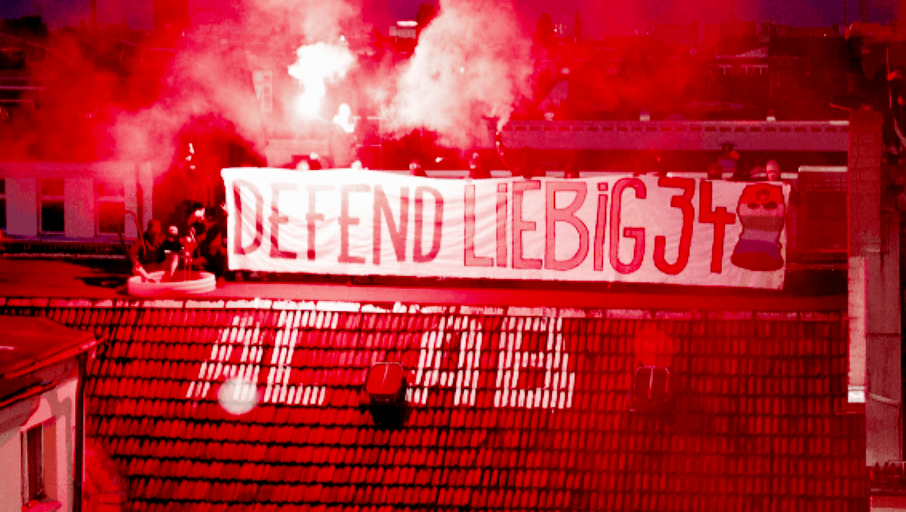 We are angry! Angry that Liebig34 is about to be taken away from us. Angry that every attempt at a self-determined life is being tried to be crushed. We are fed up with all the harassment by cops in the neighborhood and everywhere else. We are fed up with their repression, the state and its servants, who make it impossible for people to shape the city they live in.
We shit on investors for whom Berlin is nothing more than a Monopoly board on which they can move their houses around. We don’t give a shit about the yuppies who, with their new buildings and condominiums, are displacing the people who spend their lives here, for whom the street and the Dorfplatz is more than just the way to the co-working space.

We demand a city from below. We want to occupy houses. We want to decide for ourselves how we want to live.

The Liebig34 must stay! Not only because it is the home of so many people. But above all because Liebig tells the story of a Berlin where not only people with capital and an SUV could meet for a beer. Because it is a place far away from consumerism. A place of lived solidarity and feminist utopia.

The neighborhood has changed so massively in recent years and decades that many old-established residents have had to leave. Spaces of the neighborhood have given way to yuppie cafés, and condominiums are displacing house projects. When Liebig leaves, another ball of gentrification is set rolling. We don’t want to let that happen.

Let’s not wait until the next project is evicted. Let’s make a strong statement and show that we will not allow eviction.

Not only the state is taking more and more spaces from us, but also fascists and right wing forces are pushing themselves further and further into our neighbourhood. On November 3rd, the “Dritter Weg” – one of the most openly fascist parties in Germany – calls for a marching-up in Berlin Hohenschönhausen starting at 11 am. On the so-called “Day of German Unity”, neo-Nazis and self-proclaimed “National Revolutionaries” from all over Germany come to Berlin to make up for their missed May Day march.

A resistant neighborhood from below also means that fascists are not given a place. We want to oppose them as well. As always, the cops will protect the Nazis and try to prevent the antifascist resistance. We will not accept this and we will take our anger to the streets – against the 3rd way and against the state beadles who want to evict us.

We do not want to wait until the bailiff is at our door. DayX is now also every day before the eviction of Liebig34, because we have to prevent this eviction with all means.

Neighborhoods from below and places for connecting. Come to Berlin starting 3rd of October!

Liebig34 fights. Against Nazis, major investors and evictions!
(On 04.10. we want to celebrate another cultural event on the Dorfplatz with you)